There are three main research themes in our group: ​As materials scientists and engineers, we have a multidisciplinary approach to research; that is, we initially study the physics and chemistry of our nano-/micro-/bulk-materials, perform mathematical modeling, optimise their desired properties (e.g. electrical, optical, thermal, mechanical, ...), and finally move towards process design to manufacture novel devices.

Examples of Our Research Projects 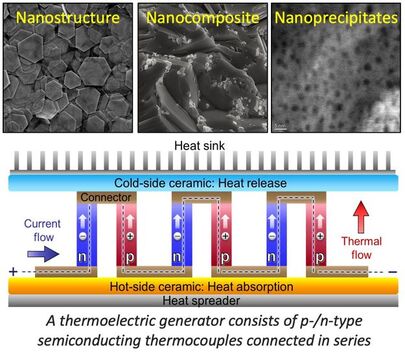 ●  ​Efficient Conversion of Waste Heat to Electricity by Nano-Engineering of Thermoelectric Chalcogenide Materials
Our primary energy systems have detrimental environmental impacts; mostly dominated by fossil fuels, they produce CO2 and other greenhouse gases that are the major cause of global climate change. Thus, the world needs a significant transition in its energy sources toward sustainable and renewable power production. One attractive approach in this regard is the harvesting of energy from waste heat by using thermoelectric (TE) materials and devices. TE devices convert a temperature gradient directly into electricity without any pollution. To improve the conversion efficiency, we focus on nano-engineering of TE materials through nanostructuring, hybridization with nanoparticles, and formation of nanoprecipitates. These approaches are effective to boost the thermoelectric efficiency through various solid-state and quantum physics phenomena. We are particularly interested in near-room temperature chalcogenide materials, such as Bi-Te, Bi-Se, Sb-Te, and their tertiary alloys and nanocomposites. 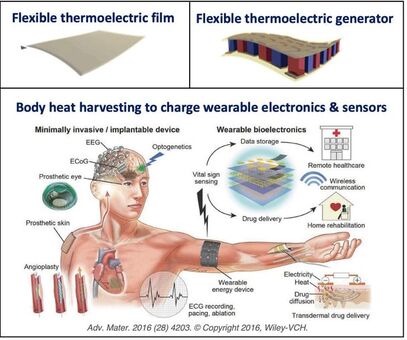 ●  ​Flexible and Wearable Nano-Thermoelectrics for Body Energy Harvesting
The majority of thermoelectric research has been focused on rigid devices, and much less attention has been paid to flexible power generators. In this project we aim to utilize nanotechnology and additive manufacturing to produce small flexible thermoelectric devices that can be attached on body skin or clothes to harvest the always-freely-available heat from the human body and turn it into electricity. We exploit functionalized inks consisting of conductive polymers and semiconducting nanomaterials to print flexible thermoelectric films in the first stage, and ultimately to print flexible thermoelectric generators. Cost-effective and facile manufacturing of such miniaturized thermoelectric generators by 3D printing, their potential to replace battery-based systems in wearable electronics and sensors with µW–mW power levels, and their unique features, such as self-sustainability and motionless electricity generation (i.e. with no moving parts), make this research very promising fo the next generation of wearable electronics and medical sensors. 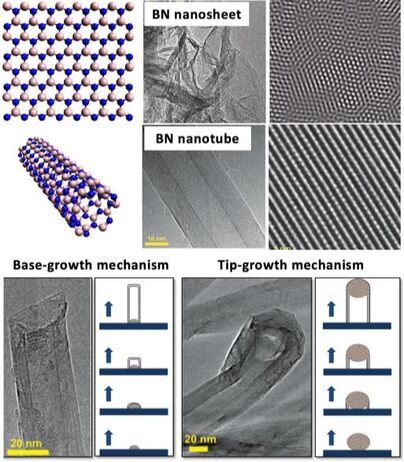 ●  ​A Comprehensive Analysis of the CVD Synthesis and Electron Microscopy Characterization of 1D & 2D Boron Nitride Nanostructures
Boron nitride (BN) is a unique chemical compound which is not found in nature and is therefore produced synthetically. BN is isostructural to carbon and can be prepared in various crystalline forms. The hexagonal form (h-BN) is a white slippery material with a layered structure analogous to graphite. However, unlike graphite, well-defined synthesis of pure highly-crystalline BN nanostructures is a very challenging task, and the reported yields from different methods are quite poor. Consequently, there had been no comprehensive study on the relation between CVD process variables and morphology of BN nanostructures. Therefore, we developed a facile CVD route to synthesize high-quality pure BN nanostructures in planar, tubular, and conical forms, (i.e. nanosheets, nanotubes, nanocones, etc). Then, in order to shed light on the growth mechanisms accountable for each morphology, we performed systematic investigations on numerous BN nanostructures via electron microscopy (HRTEM, STEM, SEM, EELS, EDX) and identified distinct growth mechanisms. For instance, we showed that thin BN nanotubes prepared at low synthesis temperatures grew by a base-growth mechanism with flat closed tips, while the thick tubes synthesized at higher temperatures grew by a tip-growth mechanism with curved tips. Also, depending on the catalyst content and gas flow rate in the CVD chamber, BN nanotubes could be synthesized in complex curly shapes, or filled with metals. 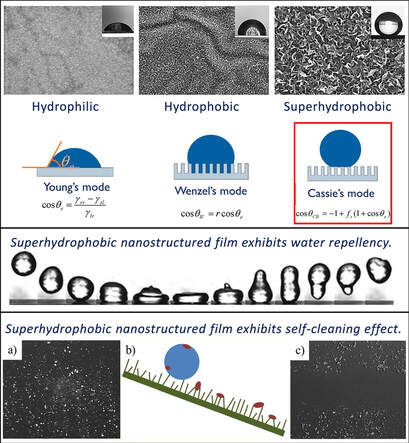 ●  ​Surface Engineering of Biomimetic Hierarchical Nanostructured Films towards Self-Cleaning and Water Treatment Applications
BN has excellent thermal stability, mechanical stiffness, and chemical inertness. This makes it an ideal material for surface protective film applications. So, we focused on the surface engineering of BN nanostructure films to control their wettability via two distinct approaches: (1) controlling the surface nanomorphology during the CVD synthesis; and (2) addition of functional groups to the surface by wet chemistry, plasma, and UV/ozone treatments. We initially grew a smooth BN film that was relatively hydrophilic with a water contact angle (CA) of ~50°. Then, by changing synthesis conditions, we grew partially and fully aligned boron nitride nanosheets vertical-to-substrate, which demonstrated hydrophobic (CA ~100°) and superhydrophobic effects   (CA ~160°), respectively. Later we synthesized other hierarchical BN surfaces composed of aligned or randomly oriented nanotubes and nanocones, and observed similar water-repelling effects due to partial liquid/solid contact at the interface of those nano-rough surfaces. We also performed a DFT simulation to compare wetting on a flat and rough BN surface, and showed that the hydrophobicity extent and water CA of each BN film was a result of the interplay between two factors: (1) dipole moment interactions of polar water molecules and BN surfaces (dictated by the orientation of BN atomic layers on the surface); (2) real area of contact at the interface of water droplet and BN nanostructure (dictated by shape, size, and morphology). 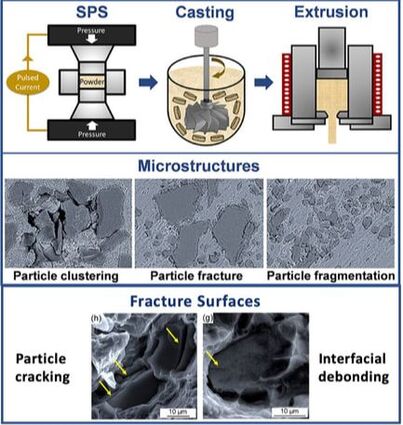 ●  ​Aluminum Micro-/Nano-Composites: Casting, Solid-State Sintering, Deformation, and Fracture Analysis
There have been many investigations on metal matrix microcomposites produced by conventional casting routes; however, in the past decade, the focus has shifted more toward nanocomposites produced via solid state routes. To have a realistic view of performance prediction and optimum design of such composites, in this work Al matrix composites (AMCs) reinforced with WC microparticles, nanoparticles, and bimodal micro-/nano-particles were prepared by spark plasma sintering. The effects of particle size and concentration, and process variables (i.e. sintering temperature, duration, and pressure) on the evolution of microstructure, density and hardness of the composites were studied comprehensively.
Then in the next step, composites of a Al reinforced with 10 wt% B4C microparticles were fabricated by a combination of spark plasma sintering and stir casting methods, followed by hot extrusion. A systematic study on the relationship between extrusion process variables (i.e. extrusion ratio, temperature, and punch speed) and porosity, particle refinement, particle distribution and consequently tensile properties and fracture behavior of the composites was performed. Extensive electron microscopy analysis and tensile testing of the composites revealed a multifactoral interdependency of microstructural evolution and mechanical properties on the extrusion process variables. For example, while increasing the extrusion ratio at higher temperatures led to moderate particle refinement, better densification of the composites, and improvement in mechanical properties, concurrent particle fragmentation and microvoid formation around the particles at lower temperatures had opposing effects on the mechanical behavior.